The last time the 49ers walked off a football field, before Sunday, the air was thick with smoke.

Fireworks smoke, due to a celebration for Kansas City, following a 49ers second-half Super Bowl collapse.

On Sunday, the 49ers walked off a field thick with smoke. Wildfire smoke, due to a conflagration for California.

And, just as they ended last season, the 49ers started the new season by allowing another team to roar back in the second half for the win.

Though February’s Super Bowl LIV and the 2020 opener seemed to barely take place in the same era — let alone the same calendar year — given all that’s taken place across the globe in the past seven months, it was impossible not to draw a connection between the two games.

One played in an overflowing, cacophonous stadium. One played in an empty, echoing ballpark. But both come-from-ahead losses handed over by the 49ers were to brash and breathtaking young quarterbacks.

The 49ers lost their opener, 24-20, to an Arizona Cardinals team led by Kyler Murray, who with every game makes it more and more clear that his spurning of baseball and the Oakland A’s for a football career was his correct destiny. He accounted for 321 yards — 91 of it running — and left the 49ers’ talented defense scrambling to contain him.

This outcome is not a surprise. The Cardinals played the 49ers as well as any team last year, despite losing both games.

“The last times we played these guys it came down to the wire,” Kyle Shanahan said. “We just came up a little short.”

Sunday’s result is an indication that the 49ers could be plying their trade in the best division in the NFL. Russell Wilson was terrific again in the Seahawks’ opening victory in Atlanta. The Rams, who played Sunday night, may right their ship. The Cardinals are incredibly talented.

And the 49ers? They’ve known all along, since the moment they walked off the field in smoke and confetti, that the road to another Super Bowl would be incredibly tough.

“That’s how football goes,” Shanahan said, of the loss. 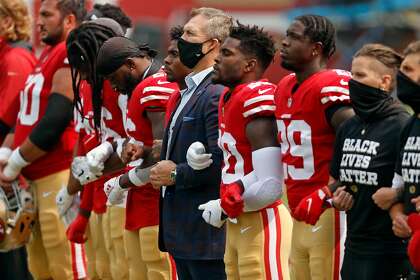 The Cardinals added DeAndre Hopkins in the offseason. The 49ers, because of injuries, roster flux and a baffling history, still don’t have a receiver near that caliber.

Both teams looked a bit rough around the edges, but don’t suggest that had anything to do with a lack of preseason games, at least not to veteran Richard Sherman.

“Preseason is the most unnecessary thing in the league,” Sherman said.

Winning NFL games is difficult. And it may be even more difficult this season.

The 49ers now embark on a treacherous part of their schedule: back-to-back games in New York against the Jets and Giants with a long stay on the East Coast in the middle.

The air will be fresher to breath. But the perils of traveling outside of established routines during a pandemic have been made very clear. One look at the Levi’s Stadium field gave you a sense of the challenge in front of the NFL. There were more than 300 people with clearance to be on the field (there were even cheerleaders, which seems a bit baffling given the empty stands). 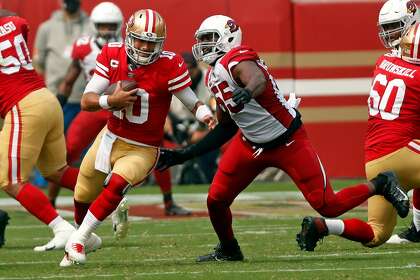 In addition to the tensions of the pandemic and the environmental challenges West Coast teams are facing, there is also the social justice movement that may pull at teams internally. The Cardinals stayed in their locker room during the playing of both “The Star-Spangled Banner” and “Lift Every Voice and Sing.” The 49ers stood along the goal line. Several knelt during the national anthem. Two players — Richie James and Jerick McKinnon — sat on the sideline apart from their teammates.

The television cameras didn’t show those pregame ceremonies. And they rarely showed shots of the empty stadium. The NFL is engaging in Kabuki theater, hoping you don’t notice any friction or weirdness and just pretend everything is fine.

But really, after seven months, it seems weird simply to watch a live NFL game. To think about the fact that the 49ers were in a Super Bowl a few weeks before the country shutdown. In a different world.

When the game ended, one of the best linemen in 49er history who retired in the offseason, tried to sum it up.

The game is almost complete! Here are the newest features

These Adorable Fish Robots Form Schools Like the Real Thing

Women’s Six Nations: What next for the Championship after 2021’s adjustments